Saturday 16 to Sunday 17 December 2006: We all met as usual at Falmer Station at 09:00hrs. There wasn`t much faffing about and after the mandatory photos we set off for the Downs. We had a bit of a problem getting across the road as there were cars everywhere. We made our first stop at the trees on the corner and I handed-out Ruths sausage rolls. I had to point out the fact that someone had pinned a small notice on a tree, congratulating us on 30 years. I`d put it there two days earlier after work.

We then set off for Rodmell and after hitting the concrete road we spotted Mark Clough coming towards us, that always makes us nervous! Gill had dropped him off at Rodmell and it was good to see him. He usually has to stay at the shop on a Saturday. We wobbled into the Abergavenny Arms and made ourselves comfy in the bar. Another person then turned-up, Smoth! You`d think he was fed up with walking the first part on his own, but apparently not

I had printed Alfriston photos on ten T shirts and handed them out, my cards were Alfriston themed too. Michael phoned John Robinson on his mobile and there was a tear in his eye because John had the flu and couldn`t be here. We enjoyed our meals, the chicken curry was massive and would surely weigh us down at Beddingham Hill. Cloughie couldn`t help himself and just had to put logs inside ruksacks and hide one up a tree!

We moved onto Southease and here the sun and the surroundings combined to create a beautiful picture. Michael fondled his marble after removing an obstruction and then we took the group photo, thirty years after the first.

When we reached the Railway, we had to wait for a train to go, only the second time this has happened, the first was in 1977 when a black 08 shunter went through towards Lewes. We then did something we hadn`t done before - walked over the new footbridge over the A26. We seemed to get up the big hill ok, Michael was at the back as usual. Some glider enthusiasts were at the top, the sun was out and the soft light on the Downs was amazing. As we walked on we met some friends of Ians near the aerials. It was then the usual fast slog along the top to the crossroads above Alfriston. Myself, Steve and Smoth still managed to take a wrong turning, after thirty years you`d think we`d know the way!

The usual array of rockets were let off by Bob and Michael but this year I`d brought along three derigibles to let off together but due to difficult lighting conditions they ended up going at long intervals. They did look great though and I must thank Ian and Phil for helping me launch them. They drifted right past the Long Man and must have dropped close to Polegate!

We arrived in the Singing Kettle at 17:45 and enjoyed hot tea and teacakes and filled it up. We then set up our tents near the car park and walked around the village for a bit. The plan was to wear our T shirts in the Smugglers that night but I couldn`t find mine. I thought I may have left it at the crossroads when I let the derigibles off so Steve said he`d drive me up there in his gardening van. He carefully picked his way up the rutted track and it wasn`t there! We then came down a different way and unbeknown to us, Bob had discovered he had my shirt on and had scurried up to the crossroads to find us, so poor Bob had to go up and come down on his own!

We did eventually settle down in the Smugglers and Kathy and her brave friends arrived to give our singing some support. After a slow start we really got going and we weren`t that bad really. Robbie and Maureen were, as usual, superb hosts and those home made mince pies were the business. We were all glad that Dave Holmes wasn`t there to wind Maureen up again! Robbie broke out the Calvados at the end of a great night and we wobbled back to our tents. It was a freezing cold night and the worst bit as ever, stumbling outside to have a piss.

Joy was ready for us in the Singing Kettle in the morning, her fried breakfasts are superb and we thoroughly enjoyed the whole spread. Sandra, and Ruth turned up and after settling-up with Joy, not easy when everyone has only £20 notes, we went shopping. We all said our goodbyes and Ruth dropped Bob at Berwick Station. 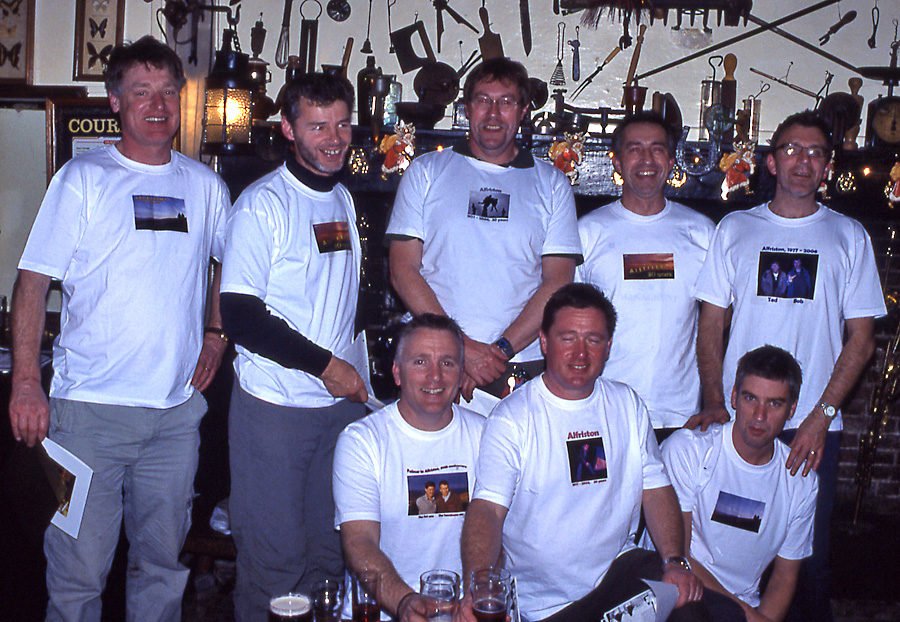