There was a good crowd at Falmer Station at 09:00hrs, Michael met me on the footbridge and after the usual photos and banter, we set off but we didn`t get far before we stopped again, the farm shop at Falmer to be precise! I must just remind everyone about Bobs “self timer” incident at the station… First he turned the camera off instead of pressing the shutter, then the self timer didn`t activate, then Bob took it himself but the self timer clicked-in and Bob had to wait with the camera in his hand flashing its amber light at us!!! We set off for the Downs and started the walk proper along the SDW. Another stop at the trees gave me a chance to unload Ruthies millionaires shortbread and make my rucksack lighter. The views over Mount Caburn and Firle Beacon were the best ever on a lovely clear sunny day. Moscow, Marks dog, was running about like a nutter, chasing sticks. We kept looking over our shoulders to see where Smoth was but he wasn`t in site yet. The walk down into Rodmell was nice, Bob was struggling with a bad cold but kept going.

We`d just arrived in the Abergavenny Arms and Smoth turned-up, so we were now up to full strength. The food was good, the beer was good (Santa`s Helper) and it was nice and warm in there. At 13:30 we had to leave to keep to our schedule to get to Southease Church for the group photo and for Mick to touch his marble, which this year was obstructed by Chelsea Charms! The group photo was arranged around a small patch of sunlight by the church door and I was disappointed that I had to call Smoth and Sensible Steve back for the photo – do they not know the script after all these years! So then on towards the Railway Line and Beddingham Hill, the calculation we were doing about watts being drawn by trains is “3,750,000”. The slog up Beddingham Hill didn`t seem too bad this time, but Mark showed his cruel side by continually throwing a huge stick back down the hill for Moscow to go and fetch! The sun wouldn`t be up much longer so we opened our flasks and wobbled onwards towards the aerials. We were quite drawn out by now but we all regrouped on Firle Beacon where we met Neil and his friend Terry. There was a fantastic orange glow to the sky for ages after the sun had gone. We trudged on past Bopeep and veered right so that we headed south towards Alfriston, I couldn`t be bothered to stop for the fireworks which was just as well because apparently the lighter wouldn`t work.

I reached the Singing Kettle at 17:15 and it was just myself and Smoth there for quite a while. Sensible Steve popped his head in to say goodbye and then the others hobbled in and we tucked into our tea and teacakes. The ladies did a great job of looking after us and soon we were warmed and refreshed. Down in the car park we said goodbye to Phil and his mates and only myself and Pedantic Pete bothered to erect our tents. When I say Pete erected his tent, it appeared to be impossible to insert the problematic long pole and even with lots of pushing, pulling and purposeful discussions, neither Pete or Smoth could make it fit. There was talk of long poles, short poles, long short poles, the wrong poles and even the wrong tent! Smoth was very diligent in his torch duties but could probably have lit the whole area by removing his hat and allowing the full moon to reflect off his head! In the end, Ian had to interject and the said pole was duly inserted in the right orifice.

I went off to take some long exposures of the Church and then we all met up in the Smugglers Inn, with Robbie behind the bar again. The tree looked very good as usual and the snug had been rebuilt after the drive through of 2004. Kathy and her friends were there and it was a good evening, many Carols were sung, some were hummed and some we gave up on altogether! We even managed an encore after the sausage rolls and mince pies came out. We stayed behind to chat with Maureen and Robbie into the wee hours until Dave upset the apple cart and we thought it better if we left, it was one of the best evenings ever in my opinion and many thanks go to Maureen, Robbie, John, Lucy the gorgeous barmaid from Prague and the kitchen staff. We got back to the car park at about 01:00hrs and the lazy ones slept in their cars while us stalwarts squeezed into our tents. I expect Smoth was praying that Petes long pole wouldn`t pop out again! It went down to about -5 degrees and as I hadn`t put my guy ropes out, my tent had sagged and my bag was very wet from touching the side. As usual I found myself bursting for a piss and had to make the horrible journey from bag to grass to unburden myself at about 06:30hrs. It didn`t take long to pack everything away and make our way back up to the Singing Kettle for breakfast. Joy did a great job of supplying us with the full works, Ruth turned up and then Sandra. We did the mandatory shopping in the high street and then it was all over, the next one will be the 30th year, in 2006. 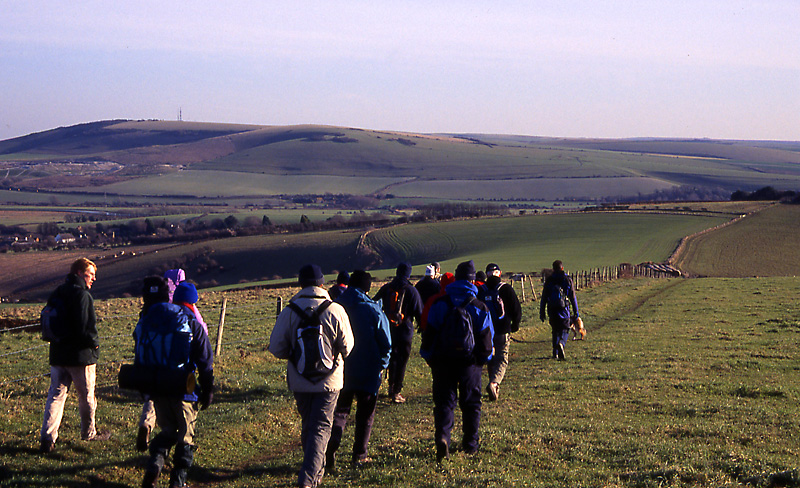 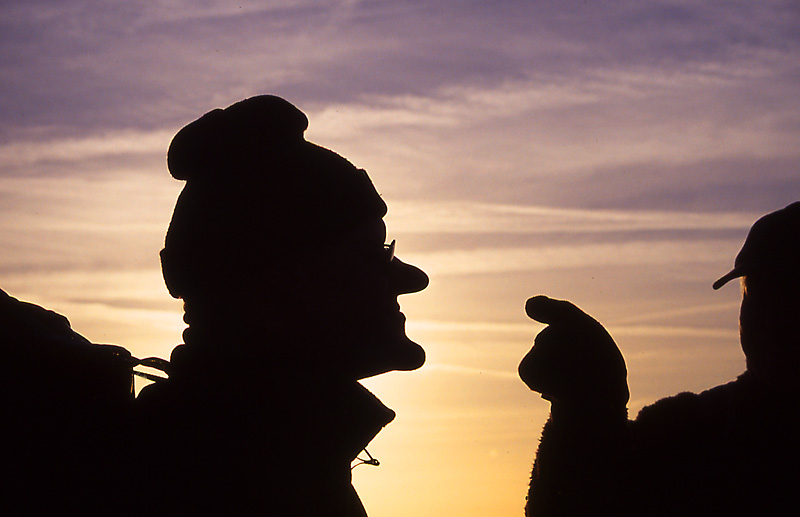 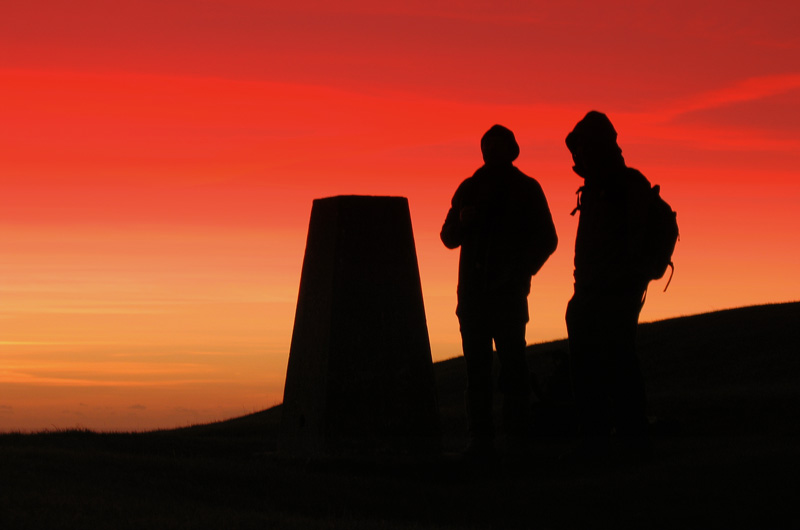 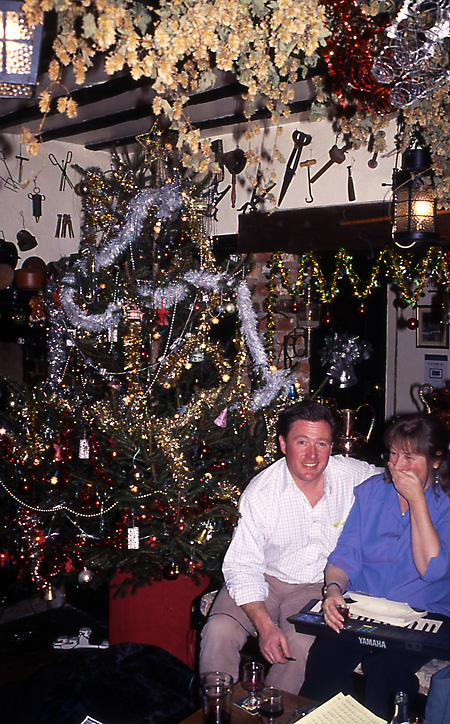 Robbie does put up a good tree
Alfriston