2004
Saturday 18 to Sunday 19 December 2004. There was a huge group of people milling about outside Falmer Station when I got off my train. It was good to see Kevin back again after an absence of 19 years! After stopping at the farm shop we sped off up the hill and were soon back on the footpath, the weather was much better than had been forecast and we didn`t actually see any rain until we wobbled into Alfriston.

We made it in good time at the Abergavenny Arms and as usual ate and drank too much but managed to get out before 14:00 and stopped at Southease for a huge group photo and for Michael to fondle his marble! Then it was the climb up Beddingham Hill with John at the rear, past the men with gliders and onto Firle Beacon where Neil was waiting for us. Time was getting on so some of us sped on to get to the Singing Kettle while others stopped to let off some wimpy fireworks! It was a tight squeeze in the tea room but they did us proud as usual.

We pitched our tents as usual, it was pissing down by now, and stormed into the Smugglers which was still boarded up after the smash and run incident earlier this year. Kathy and her colleagues were waiting for us and after much food and ale had been consumed, the singing began. It wasn`t up to last years standard and quite often would descend into humming and we`d be singing a carol to the wrong tune! Michael abused his body in every way as usual! The shy and retiring lady with the little dog will be remembered for quite some years, she managed to entangle every man in her dogs lead like a fly in a spiders web.

When we came out of the pub it was absolutely hammering down and so it was pretty grim trying to get into the tents but much worse at night trying to get out and have a piss. We managed to get into the Singing Kettle for about 09:00 and a cooked breakfast soon helped us forget about the horrible night. Only three wives managed to turn up - Ruth, Susan and Caroline. After some shopping we all went our separate ways, some went onto the Cricketers at Berwick and some went home, another cracking year.

Apologies to those poor people on narrowband but for years I`ve made the photos small for you, but now I have to cater for the majority on broadband so you`ll need some patience! 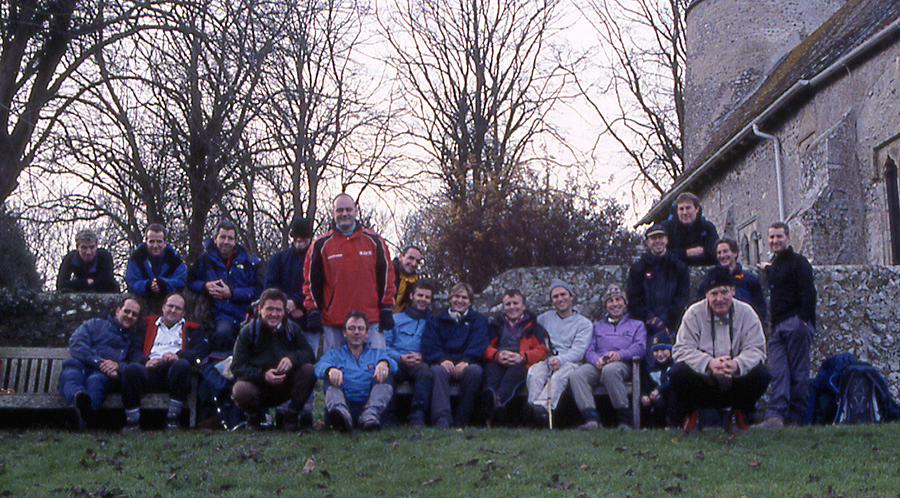 It was a good turn-out this year
Alfriston