Saturday 16 to Sunday 17 December 2000. Public transport deposited Ian, Peter and myself at Falmer before anyone else, then others arrived by car and an early start was made. We were lucky with the weather bearing in mind how bad it's been this year. Mark Odlum was dropped off by Oiefa (yes, I still can't spell it) just as we left the road, Mark was bearing a bold scar on his hooter after some cosmetic surgery went wrong!

The novices amongst us went off at an alarming speed leaving us old farts to moan about the youth of today and their lack of respect. Or maybe we were just all knackered and old. From the Downs we could see the remnants of the flood waters, it was quite warm as well. We arrived at the Abergavenny Arms at 11:45 and took over the lounge as usual. Last year it was digital cameras and recordable minidisks, this year it was Phil with his "Handspring Visor Deluxe" handheld computer. Smoth arrived after about half an hour, he'd got back from Paris late the previous night so we'll forgive him.

We tried to leave the pub earlier than usual and suceeded, the trouble was that everyone was steaming away and so at Southease Church there was only myself, Peter and Ian for a group shot. John, Smoth and Steve were'nt going to rush for anyone and so they were still in the pub. I climbed the Hill with Mick who is now the proud dad of Isabel, dad or not, he was still knackered going up there. Shortly after Beddingham we were aware of a bulky figure ambling towards us with a big grin - it was Pete! It was great to see the commitment which he so often lacks. We sped onto Firle Beacon and rested for a while, it was growing dark and we wanted to get to the tea room before it shut so off we went again. Nobody tried to climb the trig point this year.

We stumbled onto the launch site for the fireworks and Phil lit his silver cylinder only to scare the shit out of us as it exploded very loudly and showered little flares over us, not bad but blink and you'd have missed it. Ian and some others ran all the way to the Singing Kettle and made it before closing time. This meant we could all bundle in and enjoy the lovely tea cakes but it was under new management and it wasn't the same. Is this the end of an era, it's sad if it is. Steve had to leave us straight away and so missed out on the evening in the pub, hmmm, was that a good move?

We waddled off to the car park and luckily it wasn't as wet as we thought and so the tent pitching began. Peter had his usual problems with his tent and this amused us for about half an hour! We settled comfortably into the Smugglers and enjoyed the evening. We didn't know if our musical friends would be there but sure enough, there they were. It took a while to kick off but the singing doesn't get any better! We are very lucky that the people behind the bar actually enjoy it all!!! And what good sports they are (thanks for the mince pies).

We went back to our tents and I had John and Smoth in mine, I slept really well apart from some snoring which I couldn't locate, more than likely it was Pete! In the morning I was lucky enough to have a cows leg bone tied to my tent string, cheers Cloughie! It was then back up to the Tudor Tea rooms for breakfast and very nice it was too. Only Ruth and Oiefa turned up to see their loved ones and then it was time to shop, apparently Mick bought most of Alfriston up!

Myself and Ruth went back home but returned to the Cricketers at Berwick with Ruths friend Susannah and we had a nice lunch with Ian, Mick, John, Peter and Mark and his family. And that was Alfriston 2000. 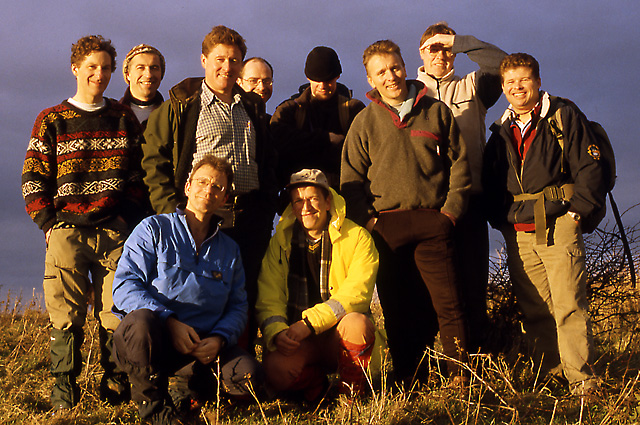 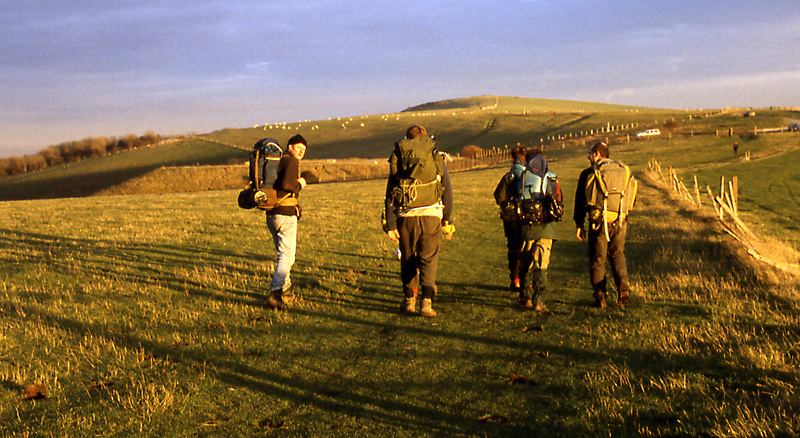